Day 17: An Inversion of Pride

28 They asked, “What must we do in order to accomplish what God requires?”

29 Jesus replied, “This is what God requires, that you believe in him whom God sent.”

30 They asked, “What miraculous sign will you do, that we can see and believe you? What will you do? 31 Our ancestors ate manna in the wilderness, just as it is written, He gave them bread from heaven to eat.[a] ”

35 Jesus replied, “I am the bread of life. Whoever comes to me will never go hungry, and whoever believes in me will never be thirsty. 36 But I told you that you have seen me and still don’t believe. 37 Everyone whom the Father gives to me will come to me, and I won’t send away anyone who comes to me. 38 I have come down from heaven not to do my will, but the will of him who sent me. 39 This is the will of the one who sent me, that I won’t lose anything he has given me, but I will raise it up at the last day. 40 This is my Father’s will: that all who see the Son and believe in him will have eternal life, and I will raise them up at the last day.”

A funny thing happened as I was doing research for this blog.

As you well know, I like posting pictures of things to distract and delight all 10 of you that read this thing, because that’s how my mind works, and I like it just fine that way, thank you. In any case, I was looking for pictures to relate to this blog, and I got a funny idea: Why not image search for a concept?

So I tried Arrogance. You know what the result was? Way more political pictures than I expected, honestly. When we think of arrogance, the first people we think of are so-called “public servants.” But here’s the thing; most of those pictures come accompanied with some kind of comment like “Oh, you think you’re better than me?”

Which as we all know comes with the silent second part: “Well I know I’m better than you, so there.”

We have a problem people.

It’s kind of weird that we see our political leaders as arrogant, considering the whole idea of a democracy is that 1) the people choose the leader, so we put them there and they didn’t get there on their own, and 2) they are supposed to think of the people that voted for them over their own wants, desires, and motivations. They’re whole job is predicated on the idea that they serve the public. Serve being the operative word there.

And yet, at the same time, when we get upset that the people we elect are arrogant, remember the people who voted for them. A friend of mine repeatedly tells me that we get the leaders we deserve, because we put them there. Are these leaders not reflective of a much larger problem, not just with the political system, but with humanity itself?

Call it pride, call it hubris, call it arrogance, call it whatever you want. It’s selfishness, and it sets up a self-devouring system that is bound for disaster.

Pride has been reappropriated in the past few decades as a word to describe something good, an ownership of identity, and that’s not inherently bad. Of course I’m okay with people who have been downtrodden or prejudiced against using it as a rallying cry to say “hey, jerk, we’re human too!” That’s just part of the struggle retain basic human rights, and that’s not a bad thing.

Nor is it bad to have pride in something, like your family or friends. I feel pride that I have a lot of friends that truly believe in something, usually bigger than themselves. I feel pride in my friends who give of themselves for others, or who are really good at writing, or accounting, or advertising, or computer science, art, math, political science, law, history, teaching, etc. I feel pride that I know these people, and that these are my friends and family. I take pride in that I know these people, and I take pride in knowing they are out there making the world better.

But when you shift that pride away from something bigger than you, away from a grander cause, and shift it to yourself, you just gave the game away.

Because that pride is arrogance. And arrogance is nothing less than self-sabotage.

The best image I can come up with for what arrogance does to us is none other than Wile E. Coyote. 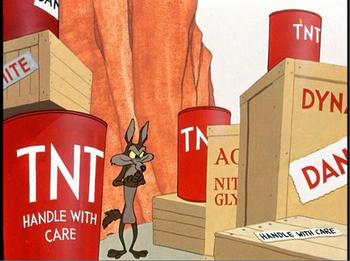 You know what's going to happen next.

Now, while certainly there’s an element of greed and desperation in the character of Mr. Coyote, I think the biggest flaw in his character is his pride. In his eternal struggle to catch the roadrunner for dinner, goes to further and further extremes to achieve his goal. Each trap gets more elaborate, and each one backfires more elaborately. Do you know why?

Because he thinks he’s a genius.

He thinks because he’s smarter than his food, that he can be cleverer than his prey, he deserves his food. In the process of building a bigger and better bird-trap, he always makes a fatal miscalculation. Whatever plan it is, it is always doomed to fail, because he thinks of himself as smarter than everyone else.

It’s a grim parody of our own machinations to gain power. It’s the trap of arrogance.

So what does Jesus offer in response to our own pride, greed, and selfishness?

He offers himself as the bread of life.

Tried to find an adequate image. Not perfect, but close.

See, while Jesus is the Son of God, he did not regard his equality with God as something to be exploited, but emptied himself and became a servant to all. He took on humanity, so that he could be closer to us. Yes, he is the one who we should and need to believe in, not only because he is God and is the only one deserving of praise, but because he came not for himself but for us. He came not to do his own will, but the will of the Father, the one who sent him.

Could he have given into temptation, taken power, and done all the things people expected a messiah to do? Yes. But then he wouldn’t be God. If God is love, then it makes sense that his love would be given freely and outwardly to those who believe in him, and not focused inwardly for the accumulation of power.

That’s the big difference. We need to give up our fantasy that we’re the most important things in the world, and live a life of giving, of outwardly focused love.

Our gifts are from God, and that’s something that we should not seek to exploit for our own benefit, but to use for the benefit of others. Our gifts are not our own; they come from God. In tasting of the Bread of Life, we admit that can attain eternal life through humility and love for God and others.  We admit that we aren’t the center of the universe.

Grant Barnes, aka Grantimus Maximus, aka The Nerdcore Theologian. Currently, he is a PhD Candidate at the Graduate Theological Union at Berkeley, California. He is a graduate of Perkins School of Theology with a Masters Degree in Divinity. He graduated from Texas State University Cum Laude with a Bachelor's degree in English, minor in History. He watches way too many movies, reads too many books, listens to too much music, and plays too many video games to ever join the mundane reality people claim is the "Real World." He rejects your reality, and replaces it with a vision of what could be, a better one, shaped by his love for God.
View all posts by grantimusmax →
This entry was posted in Uncategorized and tagged Arrogance, Bread, Humility, Jesus, Lent, Pride, Uncategorized, Wile E Coyote. Bookmark the permalink.