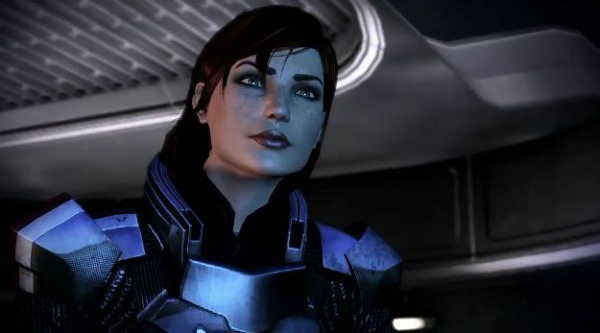 1 But in the days to come,
the mountain of the LORD’s house
will be the highest of the mountains;
it will be lifted above the hills;
peoples will stream to it.
2 Many nations will go and say:
“Come, let’s go up to the mountain of the LORD,
to the house of Jacob’s God,
so that he may teach us his ways
and we may walk in God’s paths!”
Instruction will come from Zion
and the LORD’s word from Jerusalem.
3 God will judge between the nations
and settle disputes of mighty nations,
which are far away.
They will beat their swords
into iron plows
and their spears
into pruning tools.
Nation will not take up sword
against nation;
they will no longer learn
how to make war.
4 All will sit underneath
their own grapevines,
under their own fig trees.
There will be no one to terrify them;
for the mouth of the LORD of heavenly forces has spoken.

The past week or so, I’ve been really enjoying  Mass Effect 3. I’m not going to give anything away about it, nor am I going to give an in-depth review of it, but it’s been on my mind a lot lately, among other things.

The crux of the game is that you are a commander of a star ship in the middle of a war, not between ideological opposites, but against biological genocide by “the Reapers,” ancient artificial intelligences that have apparently been around for billions of years. Since you are fighting an overwhelming force out not for domination but extermination, stuff hits the fan really fast and you have to make choices that could have unforeseen consequences. Your decisions could mean the deaths of millions, perhaps billions.

In one of the conversations my character, Shepherd, had with another named Garrus, they begin discussing the position they’ve been put in, making choices they never thought they’d have to make. it was a rather poignant moment, and it stuck with me. Garrus says that its all so new and terrifying, that they’d have to decide to sacrifice perhaps 10 billion people so 20 million could live; he called it the “grim calculus of war.” My Shepherd replied “it’s our job to not see it like that. When we boil it down to numbers, we become no better than the reapers.”

It was a nice thought; what they are talking about was more than numbers. It was people. always keep in mind, it’s always people that we’re talking about. Living, breathing, loving, fighting, dying. It’s people.

I’ve been on Spring Break this week, traveling around Texas and seeing friends and family. Yesterday, I went with some friends to the USS Lexington, an aircraft carrier, which was a pretty humbling experience to say the least. I took the whole tour, saw as much as I could stand, and it was amazing. However, we also passed the captain’s quarters, and the thought came through my head. How many captains had been in this room, holding their heads in their hands, thinking about their victories, losses, and potential casualties they would be responsible for? How many sleepless commanders paced these halls, trying to hold it together for the sake of their men? When we passed the bunks for the crew, I thought, How many homesick men slept on these bunks? How many died defending this boat for the lives of others?

We got to another room, and it hit even harder. It was a room set aside for a memorial commemorating a kamikaze attack the ship endured during WWII. It was pretty moving, because it acknowledged that the kamikaze attacks were acts of desperation, willingly undertaken by men who loved their country no less than I love mine. And I prayed for them, for the Japanese and American men that died in WWII.

It was an overwhelming experience to say the least. I posted those two passages, one from Micah and one from Matthew, because I like to hold opposing scriptures in tension when tackling difficult issues like war. I could go either way. Do you risk peace, or risk violence? It’s a grim calculus, a terrible ethics, an overwhelming burden to hold when one is responsible for decisions such as this.

I look forward to the day that we can be a peaceable people, when we can beat our swords into plowshares. However, I know that this is not that day. Jesus asks for us to make a clean break with the past, and be okay with making the tough decisions, decisions tougher than the steel of a sword.  I’m working on it. I’m praying about it. And I hope that, while I don’t ever want to be put in the position to have to work out that grim calculus, God will help me if ever I am in that position. I just pray for those now in that position. I hope that the passage from Micah becomes a reality sooner rather than later.

Grant Barnes, aka Grantimus Maximus, aka The Nerdcore Theologian. Currently, he is a PhD Candidate at the Graduate Theological Union at Berkeley, California. He is a graduate of Perkins School of Theology with a Masters Degree in Divinity. He graduated from Texas State University Cum Laude with a Bachelor's degree in English, minor in History. He watches way too many movies, reads too many books, listens to too much music, and plays too many video games to ever join the mundane reality people claim is the "Real World." He rejects your reality, and replaces it with a vision of what could be, a better one, shaped by his love for God.
View all posts by grantimusmax →
This entry was posted in Uncategorized and tagged Ethics, Lent, Mass Effect, Peace, Uncategorized, War. Bookmark the permalink.