There is little in the world as rare or as fragile as having more than one person being completely clear and in agreement with one another. If that ever happens, I will guarantee you that it doesn’t last long.
It’s hard enough for two people to agree to anything. Anybody who has been in a relationship with someone else can tell you that. Oh, there’s usually a part near the beginning of the relationship when everything is in-sync, and it certainly feels like you are operating with One Heart and One Soul. Everything is perfect, and nothing will ever go wrong. 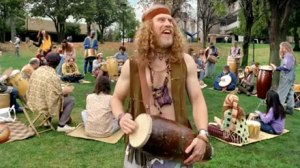 Actual footage of the early church.

When we read today’s scripture from the book of Acts, what we need to recognize is that this description of the church is but a snapshot of what life in the church is like. Many read this description, and see it as this Golden Age of the church. It’s a Utopian vision of what being the church is supposed to be: nobody needed for anything, everyone loved each other, they shared everything and gave what they could for the needy. They even have a nifty case study in Barnabus! What more could you want, right?
Yeah, funny thing about Utopias: by definition, they don’t exist. When Sir Thomas More coined the term in the 16th century, he did so by doing my favorite thing ever. He made a pun. Utopia is a Greek (!) play on words. The way he spelled it, Utopia literally means “no-place.” However, it’s a word that is a homonym with another spelling, this time EUTOPIA, and in Greek, that means “Good place!” So when we hear Utopia, we think automatically of a good place, but in reality we are talking about no place! This concludes my favorite portion of the sermon, PUNS ARE FUN!

What I’m saying here is not that the Bible was lying that there was this time in the church’s history–I have no doubts that this was the case. Heck, it may have been that way for longer than even I am imagining. What I am saying here is that the church didn’t stay that way for long, because churches are made out of people, and people are sinful. Therefore the church is simultaneously one, holy, catholic, and apostolic, AND comprised of sinful people.
To wit: the church CAN BE of one heart and soul. We just shouldn’t be so surprised when it isn’t. Why is that? Look at the next chapter.

The story of Ananias and Sapphira come directly after the description of the Utopian Church. If you don’t recognize the story, there’s a good reason for it: we don’t like talking about it very much. It’s pretty harsh.
The story goes basically like this: Ananias goes out and sells some land. With his wife’s consent, he keeps part of the money from the sale, and gives the rest to the church. Peter, ever the tactful pastor, calls them out in front of the church for LYING TO GOD. After said out-calling, both of them die instantly.
I like how Luke ends that little vignette: “Trepidation and dread seized the whole church and all who heard what had happened.”

That is exactly how that story should end. This story is why people hate and fear Stewardship campaigns. They don’t want the pastor to find out and then God smite them in front of everyone. Note: I don’t think this has ever happened since the Ananias/Sapphira episode. It didn’t need to. The message was sent.
However, that doesn’t mean that people haven’t since then tried to exploit the church for personal gain, or take advantage of good and kind-hearted people. They absolutely had. That’s just the turning point in it all.

Here’s how I see Luke wrote this account. He was good with a 4 chapter book, and almost finished, and then immediately bad things started happening after the ink dried on the papyrus.
In fact, the rest of the New Testament is dedicated to certain leading figures in the church trying to stop churches from doing terrible things to one another and get back to being “of one heart and soul.” The Revelation of John is supposed to be the final corrective to Bad Things Happening In the Church. The message is: eventually, we’ll get back to the way things were in the Golden Age on a grand scale! All we have to do is endure a whole lot of horrible atrocities. Easy, right?

The Orbits of Heart and Soul

Perhaps when you heard me read this scripture earlier, you imagined I would talk about the importance of giving. Perhaps you imagined I would give 3 Easy Steps to Creating a Christian Utopia. Those are relatively reasonable assumptions. But, as I have laid out, sometimes things don’t go as you might have imagined. Luke certainly didn’t imagine all the dysfunction of the church when he talked about the church in Acts 4. He probably was hoping against hope that it would retain its ability to live in complete harmony of heart and soul–and I don’t blame him! That’s what I want! I hope that’s what you want too. That should be the goal of the church all the time.

At its very core, the church is very much like the relationship that I spoke about earlier. At the best of times, it can seem that heart and soul are completely in sync with the will of God. When the heart of Christ and the heart of the church are in alignment, it is truly an amazing thing. The needy are given what they need. Everyone is working for the betterment of the group. At these times, I imagine it kind of like the orbital dance of earth and the sun and the moon. When they are in alignment, it is truly a sight to behold–but such times can seem few and far between. The rest of the time, they dance, ever around each other in constant motion, sometimes closer, sometimes farther, but inevitably they will again eclipse.
This, my brothers and sisters is the state of the church. We are always in a swirling dance with the will of God, ever striving to perfect unity and harmony. Sometimes, we will stumble. Sometimes, it is sublime.
We need not be discouraged, though. As with anything, the more you dance, the better you get at it. We just need to focus on the task at hand, and avoid getting lost in our own goals. We need to practice giving, and giving graciously. We need to practice listening to the needs of our neighbors, even if they aren’t a part of our church. We need to listen to each other, so that we can be truly in harmony.
Being of one heart and soul is not impossible. We’ve done it before, and we’ll do it again. For now, though, we just need to keep dancing. Amen.

Grant Barnes, aka Grantimus Maximus, aka The Nerdcore Theologian. Currently, he is a PhD Candidate at the Graduate Theological Union at Berkeley, California. He is a graduate of Perkins School of Theology with a Masters Degree in Divinity. He graduated from Texas State University Cum Laude with a Bachelor's degree in English, minor in History. He watches way too many movies, reads too many books, listens to too much music, and plays too many video games to ever join the mundane reality people claim is the "Real World." He rejects your reality, and replaces it with a vision of what could be, a better one, shaped by his love for God.
View all posts by grantimusmax →
This entry was posted in Uncategorized and tagged Acts, church, Easter, faith, Religion, Utopia. Bookmark the permalink.